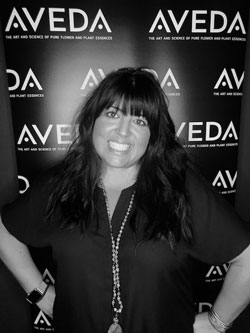 Cassandra is an Aveda Cut/Style Purefessional™ and Certified Aveda Color Educator who has been passionate about Aveda and its mission since starting her career in 2005 at Aveda Institute San Antonio. She is a Master Stylist at K Charles & Co in San Antonio, TX. During her time at K Charles she has been part of the Education Team where she helped hire, train and write curriculum for the apprentices and junior stylists and lead of their Design Team where she helped plan and execute photo shoots, fashion shows, magazine submissions and other creative ventures throughout the community. Cassandra has worked alongside members of the Aveda Global Artistic Team such as Antoinette Beenders and Allen Ruiz participating in NYFW since 2011 with Jon Reyman and the Aveda team, and loves the opportunity it has given her to channel her creativity and grow her skills while styling hair for such notable designers as Betsey Johnson, Nike, Leanne Marshall, Public School NYC, Nicholas K, Chromat, Tibi, Tome and many others. Cassandra was recently invited as one of 16 stylists from around the world to participate onstage in the 2018 Aveda Global Jam to kick off the Congress 40th Anniversary celebration. She was also asked to work backstage with legendary hairstylist Nicolas Jurnjack who was the Aveda Congress Special Guest. This summer Cassandra participated in a styling segment of Elevate Masters in New Orleans. Her passion for constantly learning and growing is what makes her such an engaging educator; and she’s committed to sharing this love for learning so others may reach their goals, sharpen their skills and be the best hairstylists they can be.